The authors discuss common neurobiological processes that may contribute to OCD vulnerability and its persistence.
NEUROPSYCHIATRY

Despite considerable heterogeneity in the precise symptoms experienced across patient populations, there is growing realization that common neurobiological processes may contribute to obsessive compulsive disorder (OCD) vulnerability and its persistence. OCD is regarded as the archetypal disorder of compulsivity (ie, a tendency toward repetitive habitual actions that the patient feels a need to perform, with untoward functional consequences such as detracting from overall life goals, or quality of life). Disorders of compulsivity include OCD and related disorders such as hoarding disorder, body dysmorphic disorder, trichotillomania, skin picking disorder, and Tourette syndrome.

“Claire,” a 21-year-old student, reports a 5-year history of moderately severe OCD, mainly relating to taboo sexual thoughts and the repeated need to confess. She signs up for a research study exploring the neurobiology of OCD, in which she undertakes a clinical assessment, cognitive tests, and a structural brain scan. At the end of the session, Claire asks whether her brain scan can be used to help confirm that she has OCD. She says she has read on the internet about research that can accurately diagnose OCD using brain scans. She asks if she can have a picture of her brain to see the changes that happen with OCD.

Structural and functional changes within the brain have long been implicated in the pathophysiology of OCD. Cortical and subcortical brain regions comprise a series of segregated circuits that may play different roles in thought and behavior. Neuroimaging work in OCD has identified structural and functional abnormalities, typically involving the orbitofrontal cortices and basal ganglia (caudate nucleus)—the orbitofrontal circuit. These findings support the classic model that consider OCD to be a disorder of maladaptive habit circuitry. This model has gained traction and evolved into conceptualizations focusing on habit and loss of top-down control by cortically mediated inhibitory mechanisms (ie, disinhibition).1,2

In recent years, it has become apparent that OCD involves changes across a broad range of frontostriatal loop circuits, although abnormalities of the orbitofrontal cortices and basal ganglia have commonly been reported.3 OCD has been associated with gray matter volume increases in subcortical structures (such as the putamen and globus pallidus) and with gray matter reductions in the cortex (especially the ventral and dorsal medial cortex and inferior frontal cortex).4 In terms of measures of cortical thickness (a proxy for the number of neurons in a particular brain region), more widespread reductions have been typically observed, including not only in the frontal but also in the parietal and temporal parts of the brain. Reduced fractional anisotropy (a measure of fiber density, axonal diameter, and myelination in white matter) in anterior midline tracts (including parts of the corpus callosum and cingulate bundle) is also seen. Collectively, these data suggest that OCD is associated with changes across anatomically disparate brain structures, both in terms of gray matter and white matter tracts.

One approach used to explore brain structure in OCD has been to pool structural neuroimaging scans from diverse group studies—a mega-analysis. Findings from 1 such mega-analysis indicate that OCD may be associated with smaller hippocampal volumes and larger pallidum volumes; however, there were no significant differences in the caudate or putamen.5 OCD has also been associated with decreased cortical thickness in various frontal, parietal, and temporal cortical regions.6 These results highlight the existence of structural brain abnormalities outside of the classic orbitofrontal loop circuit.

We can also think of the neurobiological underpinnings of OCD in terms of function of distributed brain networks, whether in the resting state or during cognitive tasks. Indeed, a meta-analysis of resting state functional connectivity neuroimaging studies identified hypoconnectivity within and across some circuits; with dysconnectivity (no particular direction of connectivity changes) in other circuits.7 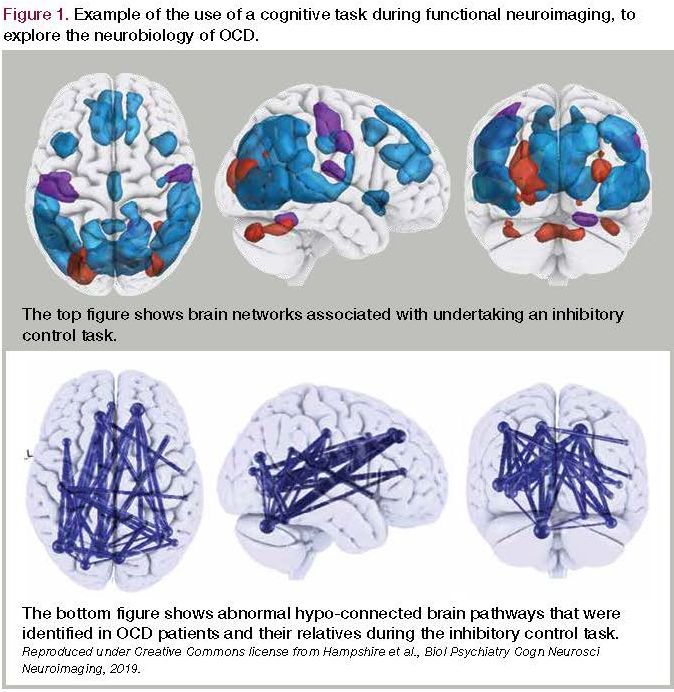 Figure 1. Example of the use of a cognitive task during functional neuroimaging, to explore the neurobiology of OCD

The imaging evidence suggests that OCD is associated with distributed, subtle, structural and functional brain changes involving not only the orbitofrontal loop but also other circuits. This information, including awareness of what the literature does and does not show, can be helpful when asked questions from patients, such as in the case of Claire in the previous Case Vignette. To answer Claire’s question about whether OCD would “show” on her brain scan, we would explain that although brain changes have been reported when comparing groups of people with OCD to those without OCD, these are average differences and are very subtle. They cannot be seen on an individual’s brain scan.

To address Claire’s other question, about whether OCD can be diagnosed using a brain scan, the answer is, “No.” There is no appropriately validated algorithm that can be used to diagnose OCD based on a brain scan. There have been studies using multivariate pattern analysis to build predictive models that are capable of classifying scans (eg, into OCD or control groups); however, one cannot conclude from this that these algorithms would generalize to OCD at large, or to other research or clinical settings. For example, smaller studies can result in model over-fit—a statistical issue whereby a model can apparently give astoundingly high accuracy; but this just reflects statistical fallacy and results would not generalize.

In 1 of the largest classifier studies to date, machine learning classifiers based on neuroimaging measures were found to be poor and no better than chance at identifying OCD when applied to an independent set of data.12 There were more promising results when these techniques were applied to a subset of the data, albeit some caution is needed because of the negative overall findings in the primary analysis.

Have advances in the neurobiology of OCD affected treatments?

“Joseph” is 28 years old with a 10-year history of severe OCD, with contamination obsessions and washing compulsions, extensive procrastination, and repetitive list making/doodling. He has undergone treatment trials of appropriate duration and dosage with various serotonin reuptake inhibitors, including augmentation strategies using other agents (eg, low-dose antipsychotic medication and N-acetyl cysteine) and extensive cognitive behavioral therapy (CBT) using exposure response prevention. His OCD symptoms remain severe; he is incapacitated by his illness and has difficulty leaving the house, for example, to go to work or socialize.

Following approval by an ethics board and a careful discussion of risks and benefits, Joseph underwent a neurosurgical procedure to implant electrodes targeting the nucleus accumbens. Approximately 6 months following deep brain stimulation (DBS) and continuation of pharmacotherapy and CBT, Joseph reported a significant improvement in OCD symptoms, and he was able to work and socialize. Three years postsurgery, his symptoms remained much improved with continuation of treatment.

Given the changes that have come about with neuroimaging, an interesting question is posed: To what extent has neurobiological knowledge of OCD modified treatment approaches for patients? Current first-line, evidence-based treatments for OCD include serotonin reuptake inhibitors and/or CBT with exposure response prevention. In a recent systematic review and meta-analysis, serotonin reuptake inhibitors and psychotherapies showed superiority over placebo in treating adult OCD. These treatments have been used for more than 30 years and have not practically been influenced or altered by neurobiological research on OCD.

Imaging has yielded insights into brain mechanisms by which treatments may improve OCD. Study data show that structural and functional brain changes associated with OCD symptoms normalize to some extent with successful medication treatment. Such partial normalization also occurs with psychotherapy.13 However, there are some caveats: often the studies comprise small sample sizes and did not have suitably rigorous control conditions, etc.

Overall, successful treatment with medication or psychotherapy seems to normalize at least some of the brain changes associated with OCD. This leads to the question of whether imaging could be used to direct or predict treatment response. Similar to diagnosing OCD at the individual patient level using a brain scan, there is no evidence that treatment can be usefully predicted at this level. Findings suggest that algorithms for treatment response using baseline scans can be built, including the ability to predict response to psychotherapy. However, these approaches have yet to be generalized or be useful at the individual patient level in clinical practice. Again, there are issues relating to statistical overfitting and findings being unlikely to generalize.

As illustrated by the case vignette, deep brain stimulation, or other neurosurgical procedures such as gamma ventral capsulotomy are sometimes used in the most extreme cases of treatment-resistant OCD. These neurosurgical interventions, however, do not help everyone and when successful, may result only in a reduction of OCD symptoms rather than remission. This finding has led research into improving these interventions on the individual level based on more detailed neurobiological understanding of OCD. For example, 1 recent study used a clinical assessment and symptomatic provocation during functional MRI to enhance electrode placement for DBS in a small sample of patients.14

Substantive advances have been made in understanding the neurobiology of OCD. We have seen that OCD is often associated with structural brain changes implicating not only the classic orbitofrontal circuit but other regions as well. These include relative reductions in cortical thickness across multiple regions, which may contribute to disinhibition and a loss of top-down control governing basal ganglia–driven habitual response patterns. Functional imaging has revealed hypoactivation during tasks of inhibitory control, as well as (typically) reduced functional connectivity between key brain regions during cognitive tasks. Although some OCD-related brain changes appear to normalize with successful treatment, cognitive and neural changes have also been identified in first-degree relatives of patients who have OCD without symptoms. This finding may reflect some biological associations constituting vulnerability markers and others arising directly from symptoms (or in association with symptoms).

Longitudinal research is needed to better delineate vulnerability versus chronicity markers in OCD and to translate these research findings into meaningful changes in daily clinical practice. To date, first-line treatments for OCD have essentially remained unchanged for at least 30 years. Neurobiological advances are useful because they can help clinicians and patients understand the illness and how treatments work. With time, the hope is that predictive algorithms can be developed and validated in order to help refine diagnosis and treatment prediction at the individual patient level.

Dr Grant is Professor Department of Psychiatry and Behavioral Neuroscience, University of Chicago, Chicago, IL; Dr Chamberlain is Wellcome Trust Fellow and Honorary Consultant Psychiatrist, Department of Psychiatry, University of Cambridge; and Cambridgeshire and Peterborough NHS Foundation Trust (CPFT), UK. Dr Grant reports that he has received research grants from Promentis Pharmaceuticals, Inc and Otsuka Pharmaceutical. He receives yearly compensation from Springer Publishing for acting as Editor-in-Chief of the Journal of Gambling Studies; he has also received royalties from Oxford University Press, American Psychiatric Publishing, Inc, Norton Press, and McGraw Hill. Dr Chamberlain consults for Promentis Pharmaceuticals, Inc and Ieso Digital Health. He receives a stipend for his role as Associate Editor at Neuroscience and Biobehavioral Reviews and Comprehensive Psychiatry.

11. Vaghi MM, Hampshire A, Fineberg NA, et al. Hypoactivation and dysconnectivity of a frontostriatal circuit during goal-directed planning as an endophenotype for obsessive-compulsive disorder. Biol Psychiatry. 2017;2:655-663.